If Email Use Is Supposedly in Decline, Why Keep Doing Email Marketing? 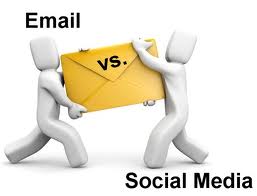 In a recent post, we talked a bit about concerns that the consumer attention span may be drifting away from email in favor of other communication channels, particularly social media. Some people are very alarmist about the trend, but as we pointed out, while email use is in decline for certain demographic segments, it's actually increasing among others:

According to the measurement firm comScore, in 2010 email usage
actually gained 22% in the 55-64-year-old demographic, and 28% in the
65+ demo, “most likely because of continued Internet adoption by these
age segments.” Younger consumers, though, are more likely to be
increasing messaging through social-media channels while cutting back
on email. Email usage, says comScore, “declined marginally” among
18-24 year-olds, 18% among among 25-34 year-olds, 8% among 35-44 year
olds, and 12% among 45-54 year olds.

Of course, some might look at that data and conclude that if email use
is declining primarily among younger consumers, then email must be
doomed long-term. But the truth is, email is still an incredibly
effective marketing channel -- if it's used correctly. And we can
think of three great reasons why email will continue to be an
indispensable part of the marketing arsenal:

1. Consumers are in "take action" mode when they're using
email. It's second nature to want to do something --
reply, forward, click on a link -- when "doing email."

2. The "Daily Deals" craze has reinforced consumer perception
that the email inbox is a place to shop. In January, Business
Insider reported that Needham & Company analysts Mark May and Kevin Allen think that Groupon and its clones, which are projected to do $3.7 billion of
business in 2010, will top $10 billion by 2015. The marketing channel
that the Daily Deals market exploded on and will continue to exploit?
Good old-fashioned email.

3. Marketers who engage consumer attention with
analytically-driven, individually-focused email campaigns are
incredibly well positioned to recapture the attention of consumers
whose attention might otherwise drift. In other words, yes,
consumers may increasingly tune out boring, ineffectual emails. But
they're not going to abandon email entirely, so the key is to optimize
your email marketing to grab and hold their otherwise fleeting
attention. You can read more about how to do that -- as well as find
out more about the challenges facing marketers -- in our recent post
The Four Things Killing Email Marketing - And What You
Can Do To Rescue It!